Following the recent news that the Midia Gas Development Project will extract an estimated 10 billion cubic meters of gas from the Black Sea, the Getech Group has been appointed by the Petro Seismic Agency to be the official release agents for its Black Sea well and seismic data. 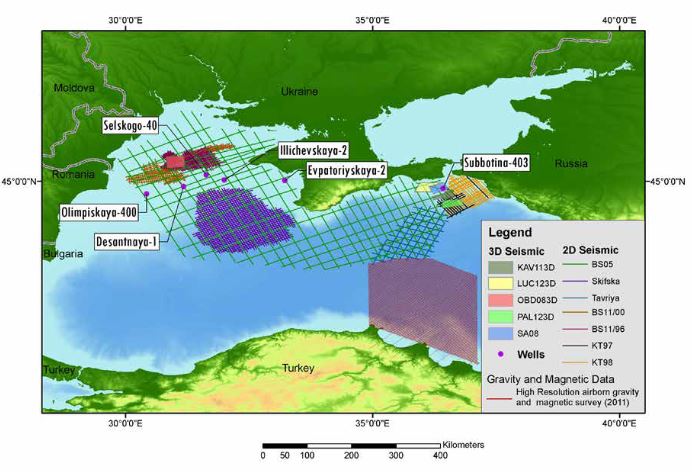 This valuable dataset extends throughout the northern part of the Black Sea basin – including the Gulf of Odessa to the west of Crimea, the Kerch-Taman Straits to the east and deeper water areas to the south – and provides 28,000 line kilometres of 2D seismic data and 3000 square kilometres of 3D seismic data.

The Gulf of Odessa is a proven wet gas province with one producing field (Golitsyna) and further discoveries awaiting development. Total discovered reserves are estimated to be in the region of 1.5 trillion cubic feet of gas.

The area covered by the data comprises part of two extensional basins formed in a back-arc setting above the northward-subducting Tethys ocean. The 5 main proven reservoirs in the shallow-water sector of the northwest Black Sea Shelf and onshore Crimea are found within Cretaceous-Cenozoic carbonates and sandstones, with the fields of the northwest Black Sea Shelf generally consisting of multilayer reservoirs.

There is potential for deeper reservoirs in the Jurassic and Triassic, but these remain relatively unexplored. Most of the margins of the Black Sea have been extensively modified since the Late Eocene which has led to the potential development of traps. A Palaeozoic source rock may have generated gas condensate in the Gulf of Odessa with likely development of oil-prone source rock of most probably Late Eocene age.

The shallow waters of the Black Sea can be regarded as being at an immature stage of exploration, further discoveries can be expected. The deepwater (greater than 100 metres) sector of the Ukrainian Black Sea is undrilled; it is this frontier region that holds the greatest potential for substantial oil and gas finds Getech Head of Geoscience Services, Sarah-Jane Kelland, commented: “The Black Sea offers exciting exploration opportunities, covering deep and ultra-deep water settings. The extensive data sets are an essential partner to help firm up these structural and potential stratigraphic hydrocarbon-trapping features in an area that is largely unexplored.”