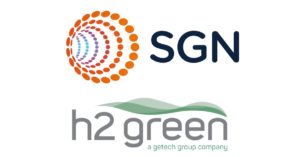 Getech is pleased to announce the completion of the first step in developing the Inverness green hydrogen hub. Working with SGN Commercial Services, phase one has seen the successful deconstruction of Inverness’ former gas holder, paving the way to convert a legacy natural gas holder site into a future green hydrogen storage and distribution facility.

The site forms an important element of Getech’s broader hydrogen network development for the Scottish Highlands. Situated alongside Inverness’ rail head, it is ideally positioned to supply clean fuel to the hydrogen trains that will operate in this region.

The completion of phase one represents an encouraging step in the process to develop a multi-hub green hydrogen network, with Inverness at its core. Through revitalising this legacy gasworks as a green hydrogen hub, the site can maintain its significance to energy storage and distribution in a net zero future. This asset will kick start the decarbonisation of rail across the Scottish Highlands by providing a facility specifically designed to service hydrogen train fleets in the centre of the Scottish Highlands.

The time-lapse video of the gas holder deconstruction is available to view on the Getech Media page.

“The completion of demolition of the SGN gas holder site demonstrates tangible progress in our hydrogen operations in Inverness and forms part of a range of broader strategic initiatives being undertaken by Getech to achieve the production, storage and supply of green hydrogen – supporting our ambition to establish at least 500MW of new geoenergy and green hydrogen assets by 2030. Hydrogen has a critical role to play in the clean energy transition and we continue work closely with stakeholders, including The Highland Council, to establish a network of green hydrogen hubs across the Scottish Highlands.”

“This is an important milestone in transforming the site of our old gas holder to create a hydrogen supply and distribution hub, which will play a key role in decarbonising transport across the Highlands and wider Scottish economy. It will not only help reduce carbon emissions but will deliver jobs and skills opportunities in the local area. We look forward to working with the Scottish Government to help build the regulatory and policy frameworks that will support the build out of the hydrogen economy at pace across Scotland.”

“This project in Inverness is a pioneering example of the hydrogen economy’s potential to help decarbonise a number of sectors across Scotland. It builds on a number of Scotland’s existing success stories, from the expanding hydrogen bus fleet in Aberdeen to the world-first H100 Fife project in Levenmouth, that will be delivering green hydrogen for up to 300 customers next year. With an abundance of renewable potential across the country, there is a fantastic opportunity to generate even more hydrogen and put Scotland on a clear path to reach net zero by 2045.”