When Will the UK Government Get Serious About Geothermal?

Geothermal energy is a source of clean energy for industrial buildings and people’s homes but will the UK Government grasp this opportunity? 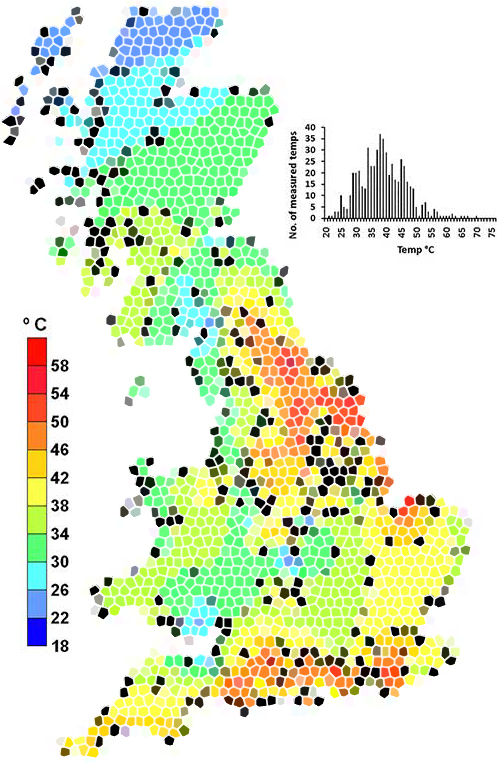 Measured temperatures at 1 km below ground level in the UK (based upon Busby et al., 2011)

IGas Energy recently announced that it has received planning permission from Stoke-on-Trent City Council to develop a deep geothermal project in the Etruria Valley.

The company believes that this zero-carbon source of power will provide people living in the city of Stoke with heating, for decades to come.

If its vision is realised, this project will join the UK’s previously only working geothermal plant, run by the Southampton Geothermal Heating Company: a development which provides heating and power to local municipal, hospital and university buildings.

The UK is not an actively volcanic country but many opportunities to benefit from the geothermal energy below our feet do exist.

In January of this year, deep geothermal operator Geothermal Engineering signed a power purchase agreement with utility company, Ecotricity for three to five megawatts of power produced from its United Downs site in Cornwall.

The company claims that this is the first sale of geothermal energy in the UK.

But will this – and projects like it – be the catalyst for a new national industry, or will sub-surface heat remain a niche source of power?

The Association for Renewable Energy and Clean Technology (REA), in partnership with more than thirty engineering firms, universities and environmental organisations, believe that the former is not only true but vital for the UK’s prosperity.

Entitled ‘Deep Geothermal Energy: Economic Decarbonisation Opportunities for the United Kingdom’, REA’s recently released report details how the development of 360 geothermal plants by the year 2050 could provide 15,000 GWh of heat every year.

This is a remarkable number when you consider that, according to the World Wind Energy Association, all the wind farms in the world ‘only’ provided 744 GW of power in 2020.

Given that heating and hot water account for approximately forty per cent of the country’s energy use and a third of its greenhouse gas emissions, the UK government should find geothermal attractive considering its ambitious ‘zero-carbon’ targets.

So, will the government make the investment needed – will there be a nationwide plan, along the lines of the soon-to-be-released Hydrogen Strategy (point 2 in the Ten-Point Plan for a Green Industrial Revolution)?

In May of this year, the Department of Business, Energy and Industrial Strategy (BEIS) announced a ‘£44 million cash boost to cut emissions from buildings and help households save on energy bills.’

Whilst the majority of this money is earmarked to develop ‘heat networks’, the central sources are not geothermal (outside the use of some ground source heat pumps at the Cambridge site).

However, the remaining c. £15M in funding is for ‘exploring ways the UK can develop and use efficient, low-carbon technologies for heating and cooling buildings.’

As welcome as this is, it is a drop in the ocean of funding that is needed to realise the potential of reducing the carbon we emit whilst creating heating and hot water, on a commercial scale.

Further, it is an opportunity that a number of European countries already appear to be grasping.

The European Geothermal Energy Council represents the interests of more than 120 members from 28 countries. 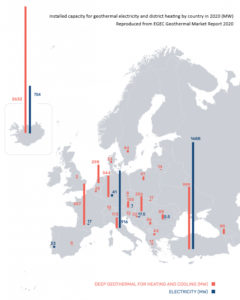 In introducing his organisation’s Geothermal Market Report for 2020, Philippe Dumas, EGEC Secretary General, said “The past 10 years highlight how rapidly the geothermal sector can evolve, having witnessed the rapid emergence of leading geothermal countries in heating and cooling, such as the Netherlands and Germany. However, the past decade also tells a story of missed opportunities, with a few countries not living up to the expectations of 10 years ago. This is mostly due to unsuitable policy decisions, lack of recognition of its huge potential and insufficient awareness about its competitiveness.”

And, when you look at the wide range of investment and resulting geothermal power produced by various countries across Europe (see image), you can understand his frustration.

Marit Brommer, Executive Director of the International Geothermal Association sees this cautious uptake as an opportunity for oil and gas professionals:

“The overlap between geothermal and oil and gas is in exploring, drilling and production. With this comes expert understanding of the earth’s sub-surface. It takes expert knowledge to find the right spots to drill, how to drill, what equipment is needed, and how to use it. During the current crisis, many skilled workers in oil and gas drilling companies are on standby. These workers could be re-deployed to the geothermal sector.”

Developing a significant proportion of electricity and heat through the development of geothermal projects in the UK will go a long way to enabling the country to meet its net-zero targets, while reducing its dependency on imported power.

Getech is using the geological understanding and expertise it has built up over years of sub-surface scientific study to support new players in this emerging industry and is working to develop new ways of understanding where commercial geothermal opportunities exist.

Only time will tell if the UK government and the wider industry have the collective will to grasp this opportunity for prosperity, energy security and a cleaner future.