The Right Data for the Right Problems – Part 4

Creating tectonic reconstructions requires diverse data from across geology and geophysics; methods and techniques to uncover the tectonic evolution of one area often do not apply to another area.

In this series of articles (don’t miss Part 1, Part 2 and Part 3), we look at interesting tectonic problems from around the globe, the data required to solve them and why better understanding of the tectonic systems leads to better insights into the formation and preservation of petroleum systems and ultimately better exploration decisions.  In Part 4, we look at the evidence indicating complex plate interactions in the Caribbean region and how imaging Earth’s interior provides further support to the tectonic evolution model.

The margins of the Caribbean Sea play host to important petroleum systems, notably in Colombia, Venezuela and Cuba; understanding the tectonic evolution of the area can clarify the origins of these systems and should help to indicate the potential locations of neighbouring petroleum systems. The tectonic history of the Caribbean Plate is widely debated, but it is now broadly accepted that the plate must be a far-travelled piece of Pacific lithosphere trapped between the North and South American Plates. For such a model of tectonic evolution to work, a complex sequence of plate interactions between the Pacific, North American, South American and Caribbean lithosphere is required, including the subduction of a considerable amount of Jurassic and Cretaceous ‘proto-Caribbean’ seafloor. 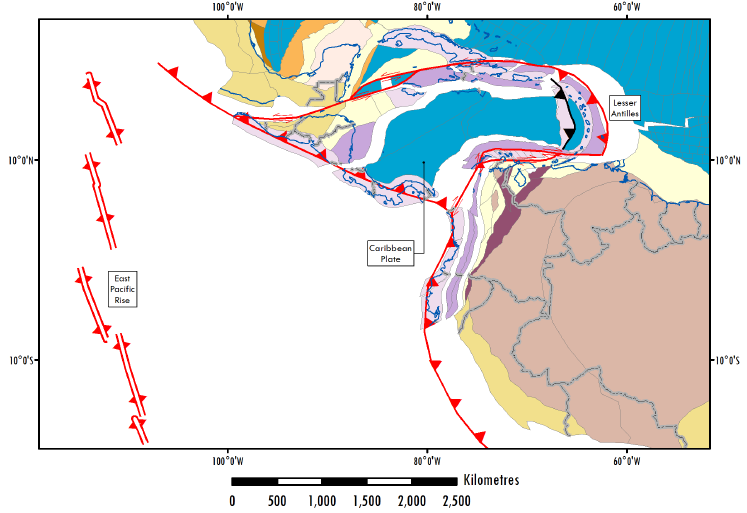 Figure 1: Oligocene reconstruction, shortly after the onset of the eastward motion of the Caribbean.

Key observations for lateral motion of Caribbean-related geology are found throughout the Caribbean. Between 900 and 1,100 km of offset is predicted by:

In the preferred model of tectonic evolution, the separation of Pangaea since the Jurassic also causes separation between the North and South American Plates, with North America moving with Laurentia away from South America in Gondwana (Figure 2).

Figure 2: How global tectonics and the opening of the Atlantic Ocean influenced the Caribbean region. Top image: Pangaea in the Early Jurassic. Bottom image: The Caribbean region (red box) during the Santonian.

Consequently, oceanic crust is formed in the Caribbean region and termed the proto-Caribbean. In the Pacific-origin model of Caribbean tectonics, proto-Caribbean seafloor must be subducted beneath the Pacific Ocean from the middle of the Cretaceous (Figure 3).

Evidence of Cretaceous intra-oceanic island arc volcanism is now found in the eastern Caribbean, from Cuba to Venezuela. To further support this hypothesis, we can use seismic imaging to get a look deep into Earth’s mantle for evidence of the subducted lithosphere. A technique called seismic tomography works much like active source seismic data used to scan basins for hydrocarbons. Tomography uses P and S waves generated by earthquakes and a global network of seismometers to image the entire Earth. 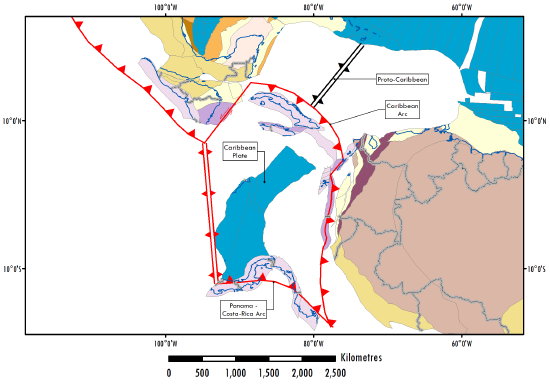 Figure 3: Subduction of proto-Caribbean lithosphere in the Late Cretaceous.

The seismic waves travel faster through a denser medium; waves travelling different paths arrive at their stations at different times. A global compilation of events can be mathematically inverted for seismic velocity variations through Earth’s mantle; the variations are a proxy for the density and temperature of the mantle, and so cold, dense regions can be thought of as subducted oceanic lithosphere.

In the Caribbean, seismic tomography reveals as much as 900 km of faster than average seismic velocity in the mantle beneath Colombia (Figure 4), indicating that the mantle there is colder and denser than the surrounding mantle. 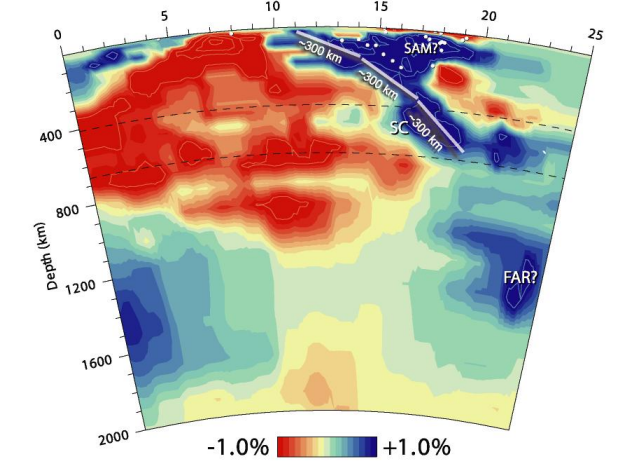 The geometry of the fast anomaly is slab-like and joins to the surface, and so can be confidently interpreted as subducted oceanic lithosphere, providing further support for a Pacific-origin for Caribbean lithosphere.  Although using seismic tomography cannot directly inform us about hydrocarbon systems, it may prove a very useful tool to validate tectonic reconstructions, particularly in areas where tectonic evolution is unclear.

As always, understanding the tectonic evolution of a basin is a key step in the exploration process, and making use of tomography data sets, which are often freely available, is another way to improve tectonic reconstructions.