Finding the next IOCG monster

Iron oxide copper gold (IOCG) ore deposits are a hugely important mineral resource as they provide large quantities of the world’s supply of iron, gold, copper and uranium. By-products of IOCG deposits include a number of rare earth elements, which are essential for the energy transition. The largest discovered IOCG, Olympic Dam in South Australia, contains more than 10,000 Mt of high-grade ore.

IOCG ore deposits are typically associated with hematite and magnetite rich mineralisation zones. Hematite is characterised by high density and low susceptibility, while magnetite by high magnetic susceptibility – these properties mean that gravity and magnetic data are valuable and cost-effective tools for predicting locations of IOCG deposits (Figure 1). 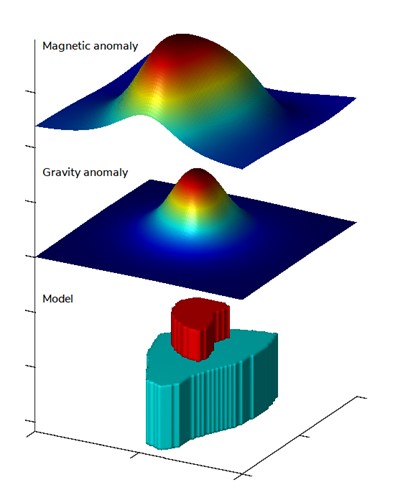 Figure 1 – Getech modelling shows that a dense hematite body (red), above a highly magnetic magnetite-rich zone (green), produces strong potential field responses. Looking at the sub-surface distributions rather than just the anomalies themselves can tell a lot about the location, geometry and formation of IOCGs. Figure by Getech.

At Getech, we have investigated how best to use gravity and magnetic data as predictive tools, focussing on a number of known IOCG deposits. We have found that looking for anomalies in both data sets is not ideal as it tends to highlight the surface anomaly rather than the sub-surface ore bodies and does not allow analysis of the 3D interaction between the anomalous bodies and the relative locations of their alteration.

Instead, we use a 3D inverse modelling approach. The process involves dividing the subsurface into a mesh of cells or voxels, each containing a single value for density in a gravity inversion, and either a value for susceptibility or information about the magnetisation vector, if remanent magnetisation is likely to be present, for an inversion of the magnetic data (Figure 2).

The observed data is then pre-processed to remove the effects of any large-scale regional variation that is likely to result from deep crustal sources or responses from lithological units. This residual dataset is iteratively inverted to produce two 3D volumes, one for sub-surface density and one for magnetisation.
With these two resulting models, we can investigate the nature of the density and magnetisation subsurface in 3D to look at the spatial relation between anomalous bodies in the locations of existing IOCG deposits, as well as performing sweeps of large areas looking for similar anomalous relationships in less-explored areas.

Figure 2 – The mineralisation process around IOCG deposits often leads to remanent magnetisation. Modelling the magnetisation vector can help the identification of discrete bodies, even when the surrounding geology is also highly magnetic.

As one of the best studied IOCG deposits in the world it is an excellent candidate for testing the resolution that can be derived using the data typically available for large regional sweeps of unexplored areas.

Of course, additional high-resolution data coupled with further localised geological insight can help create a highly constrained model to greatly aid the more detailed definition of a given exploration target, but here we are concentrating on the predictive exploration of large new areas.

Figure 3 – Getech gravity (left) and magnetic (right) over part of the Gower Craton, South Australia. These are the two data sets that can be used to create models of the density and magnetisation properties of the subsurface.

The amplitude of the anomalous bodies depends on the contrast between them and the surrounding background geology. It is therefore necessary to test several threshold values when interrogating the 3D models for similar co-incident anomalous bodies, especially when the model is covering a large regional area.

Figure 4 shows the interaction between the anomalously dense and magnetic bodies in an ~140×180 km area of the Gawler Craton around Olympic Dam, and Figure 5 shows the anomalies modelled directly beneath the Olympic Dam mine.

We observe a number of promising coincident bodies, including some associated with other known deposits, which might be considered targets for further investigation. These coincident anomalies can then be mapped to highlight the distribution of potential IOCG targets (Figure 6). 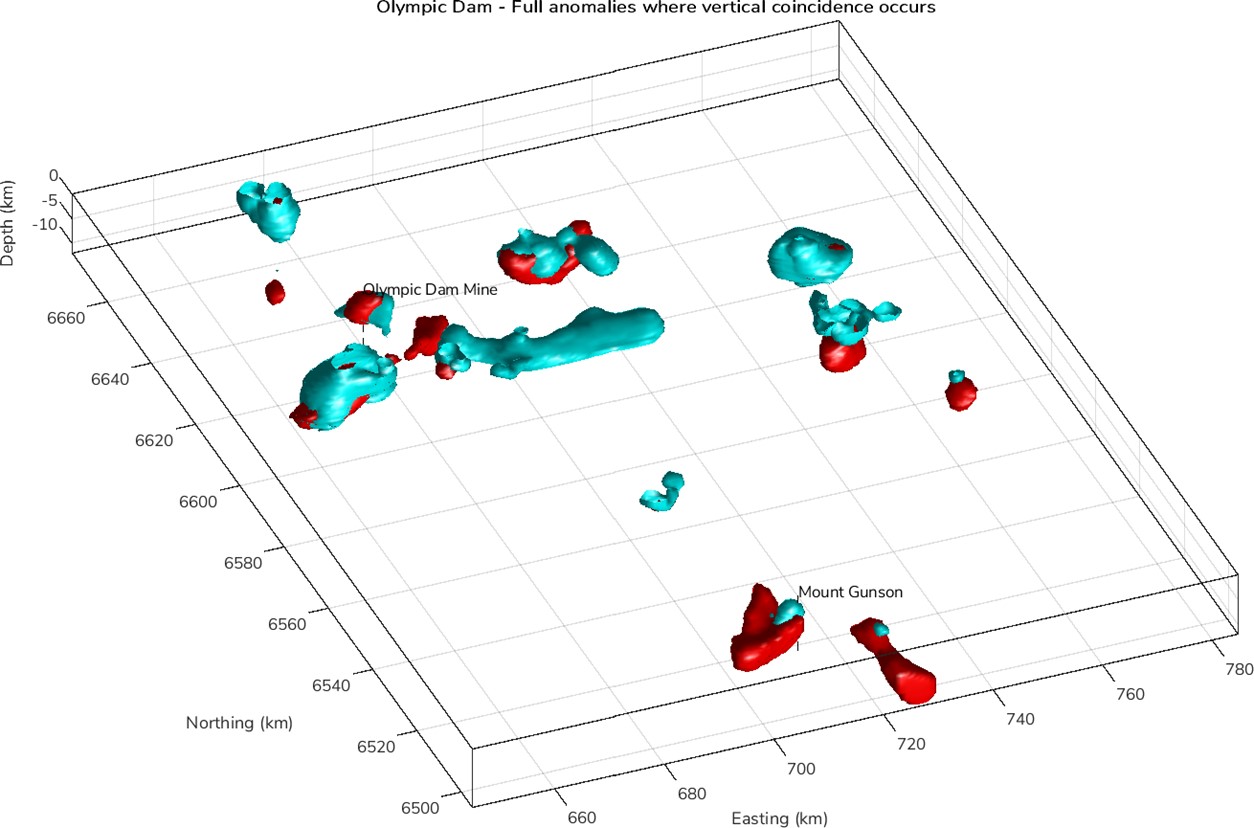 Figure 4 – Once the 3D models have been created, it is possible to identify areas where both density and magnetic anomalies are both present. The full extent of these anomalies can then be viewed so that the geological context can be determined. 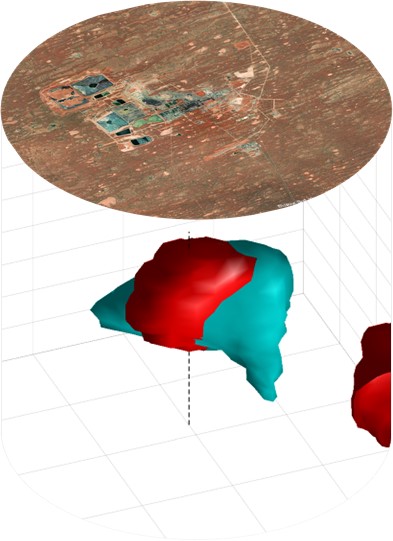 Figure 5 – The Olympic Dam mine, showing the distribution of the subsurface density (red) and magnetisation (green) anomalies recovered by the 3D inverse modelling. 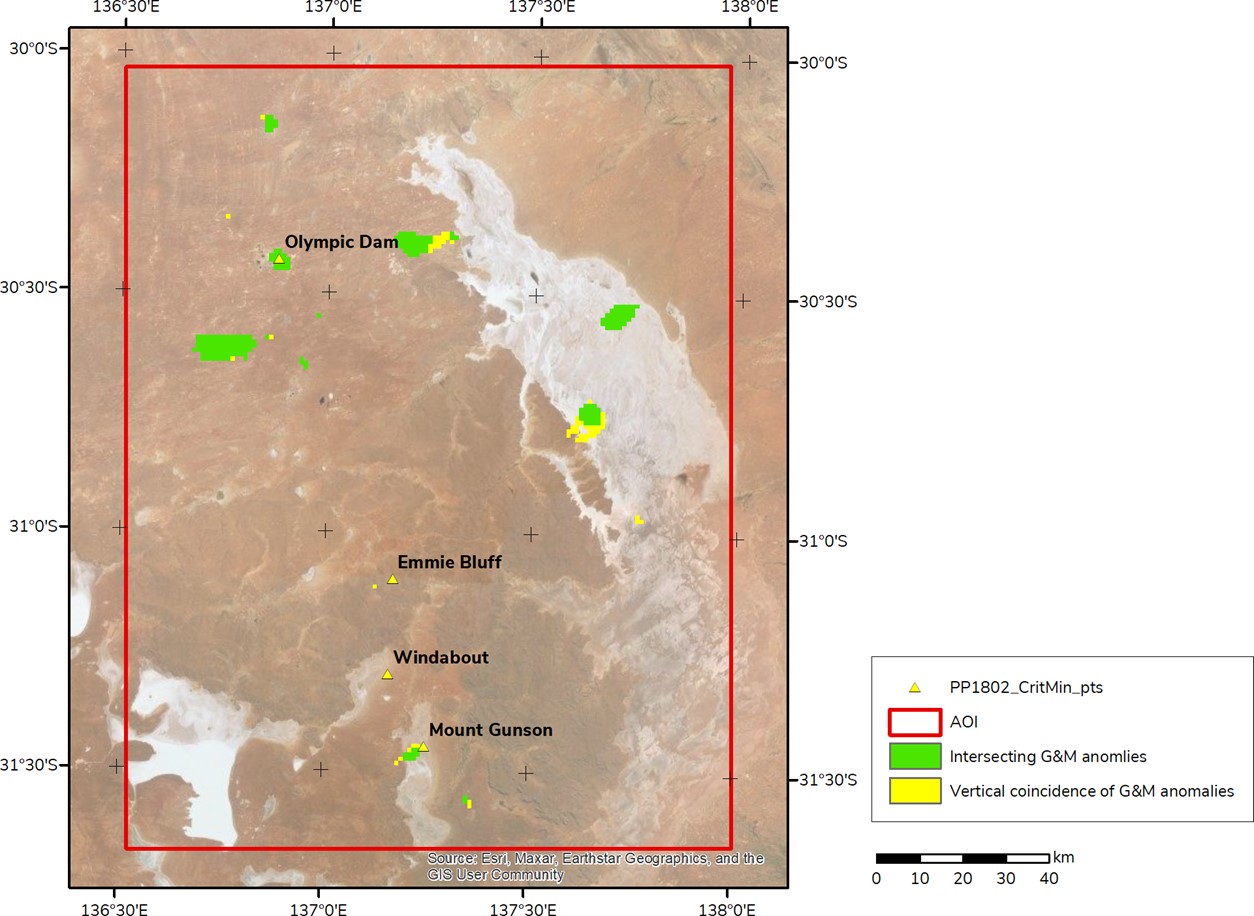 Figure 6 – Identified areas of interest are shown, based on the interaction between modelled gravity and magnetic anomalies.

Predictive Tool
Our case study illustrates a strong correlation between the known IOCG deposit at Olympic Dam and modelled density and susceptibility anomalies. This approach has been expanded to the larger regional area where neighbouring deposits (e.g. Mount Gunson) are observed along with the identification of numerous other potential targets. Typically, the density and susceptibility anomalies are broadly coincident with horizontal and/or vertical offset observed due to local structural and alteration environments.

For further information about how our data and modelling services can help your minerals exploration efforts, please contact us at info@getech.com