The Sierra Leone Fourth Petroleum Licensing Round is scheduled to close on 28th February 2020 for both Open Tender and Direct Tender categories.

Following on from recent successes in the deep water plays of South America, including the world-class Liza discovery in Guyana, could the Sierra Leone margin be the next in line for deep water exploration success?

Petroleum exploration along the Equatorial Atlantic Margin has been buoyed by the recent large oil and gas discoveries of Joe, Jethro, Liza, Zaedyus, Fan, SNE, Yakaar, Tortue and Orca in Guyana, Suriname, French Guiana, Senegal and Mauritania. These discoveries are along trend with the sparsely explored open acreage in Sierra Leone, suggesting excellent potential in this perfectly positioned “meeting of the margin’s” location (Figure 1). 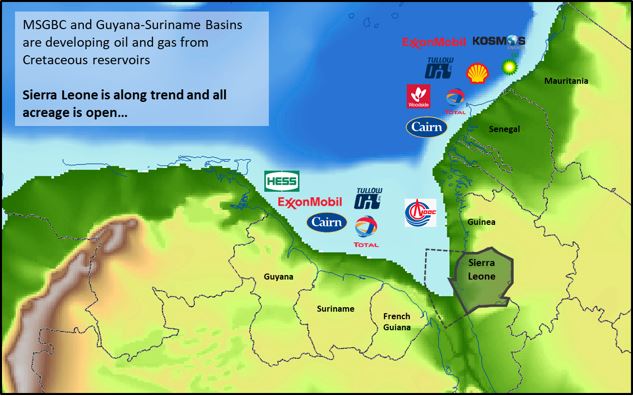 Figure 1: The Equatorial Atlantic Margin during Aptian showing the location of Sierra Leone along trend with the recent discoveries. Company logos represent key players in the offshore areas.

Using Getech’s high-resolution plate kinematics for the Equatorial Atlantic, we model a revised pre-rift fit, the separation of the Guyana and Northwest African Cratons, the formation of the margin-opposed basins, syn-rift histories, the timing of break-up and the ensuing subsidence characteristics.

The multidisciplinary elements of Globe, our geoscience knowledgebase for ArcGIS, have been integrated into a consistent tectonostratigraphic evolution model, along with palaeogeographic reconstructions, digital elevation models, ‘source to sink’ portrayals and palaeoclimate predictions to bring together key reservoir, source and seal relationships. This allows for the direct lithostratigraphic comparison of the African MSGBC, Sierra Leone-Liberia and the offset South American Guyana-Suriname basin, and provides greater insight into the hydrocarbon discoveries tied to petroleum systems and upside play potential.

Globe’s palaeogeographic reconstructions illustrate how the Sierra Leone Margin was perfectly positioned within the same ‘postcode’ as the Guyana, Suriname, French Guiana, Mauritania and Senegal discoveries during the Cretaceous deposition of the major source rocks and key reservoir intervals. No more than a couple of hundred kilometres separated the modern-day coastlines of Sierra Leone and South America during the Cretaceous (Figure 2). 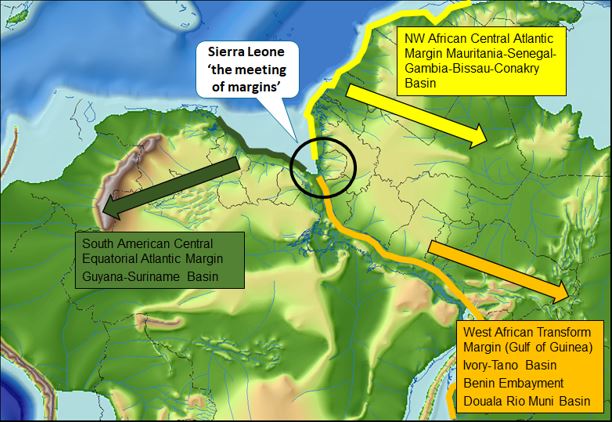 Figure 2: The Aptian location of Sierra Leone posited at “the meeting of the margins” – the African MSGBC and its offset to the conjugate South American Guyana-Suriname basin and the West African Transform Margin (WATM).

Getech Multisat free air gravity data show the change in tectonic domains, the relationship between the main fracture zones, thick continental crust, the continental ocean boundary and transition from the MSGBC to the WATM (Figure 3). Sierra Leone forms the boundary between the MSGBC basin to the north and the WATM to the south, separated by the Strakov FZ (also known as the Sierra Leone/ Monrovia Fracture Zone). The data show several large north-south syn-rift basins in the northern Sierra Leone basin created during the east-west Jurassic extension event. The grabens are likely to be filled by pre-Cretaceous rift strata, including potential lacustrine source rocks, similar to the proven good quality Middle Jurassic source in the Guyana-Suriname basin. 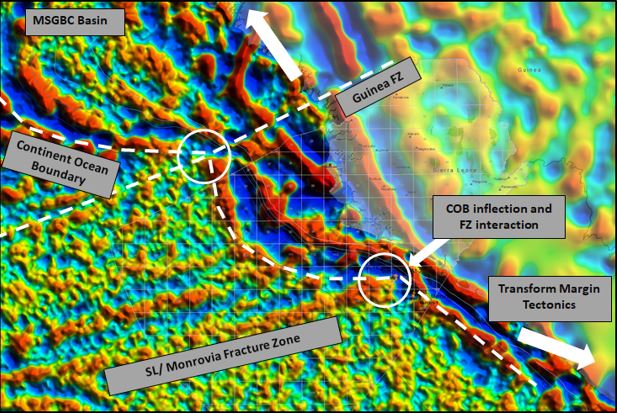 The gross depositional environment (GDE) setting of the Sierra Leone Margin (Conakry, Sierra Leone, Liberia basins) and Demerara Plateau (Guyana-Suriname basin) show the feeder rivers and sediment deposition at Cenomanian time (Figure 4). As time goes by, clastic input over northwest Africa increases to the north as a result of the more favourable hinterland during the Campanian for sediment source.  The presence of working petroleum systems has been proven along the conjugate margins of the Central and Equatorial Atlantic, ready to be targeted in the underexplored deep water and in the northern shallow water sections of the Sierra Leone basin. 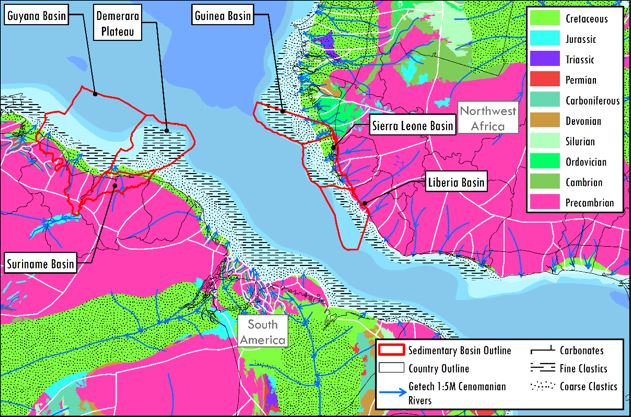 Figure 4: The GDE of the Sierra Leone Margin and Guyana-Suriname basin showing the palaeorivers and palaeosurface geology for the Cenomanian.

The majority of reservoir targets are marine channel and fan sandstone complexes ranging in age from the Aptian to Miocene (Figure 5). New work by Getech also highlights the potential related to several structurally controlled syn-rift lacustrine basins resulting from the initial Atlantic opening during the Mesozoic (Figure 3).

Figure 5: South to north orientated seismic line through the Mercury-1 well which found oil in two Albian fan systems, 34.7m of 34°-42°API oil in the primary objective and 6.4m of 24° API oil in a shallower secondary objective.

With numerous explorers looking to exploit the similarities on either side of the transform margin, Getech Group, on behalf of the Petroleum Directorate of Sierra Leone, are pleased to offer over 10,000 sq km 3D, 20,000 line km 2D seismic and data from 8 wells – including 4 discovery wells – to help bridge the gap. Much of this data has never before been made available and should provide important data points for modelling basin evolution and petroleum systems on both sides of the Equatorial Atlantic Margin.

For more information on Globe and how Getech’s Equatorial Atlantic Regional Reports could improve your chances of exploration success please contact info@getech.com.

Further information on the Fourth Licensing Round including Bidding Guidelines, Regulatory Framework, Technical Data Packages and Data Room access requirements can be obtained from www.pd.gov.sl and www.pd-sl.com.