Sierra Leone – the next in line for deep water success?

Following on from the recent successes in the deep water plays of South America, including the world-class Liza discovery in Guyana, could the Sierra Leone margin be the next in line for continued deep water exploration success? To date there have been eight exploration wells drilled offshore Sierra Leone, all located toward to the south of the margin. The Sierra Leone Basin can therefore be considered underexplored in terms of hydrocarbon exploration. 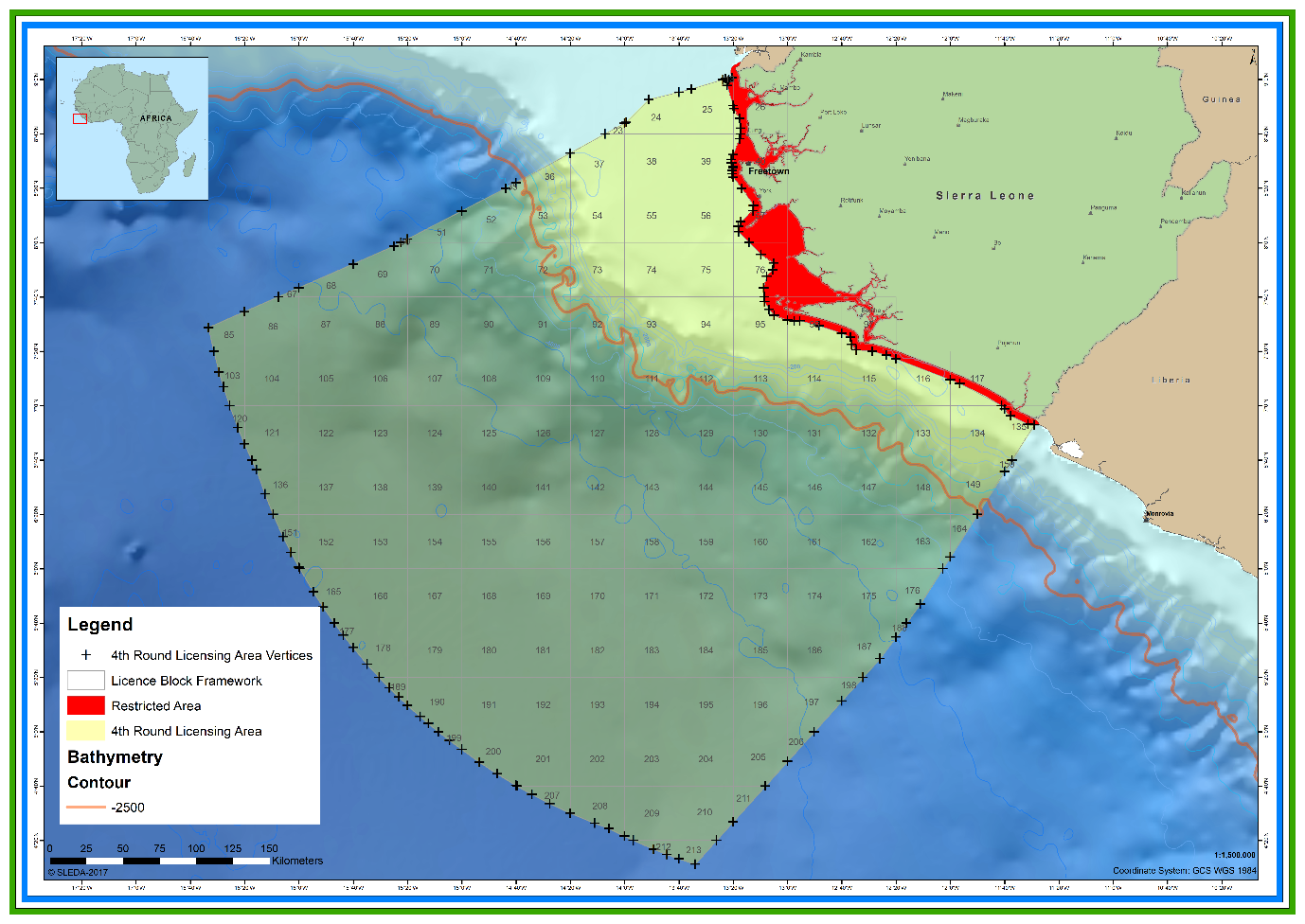 An active petroleum system was proven in Sierra Leone during the last phase of exploration from 2009-2013, with multiple oil and condensate accumulations encountered in deep water Cretaceous slope fans (including 35 m oil light oil encountered in Mercury-1). Since 2014, Sierra Leone has seen a hiatus in exploration activity due to the global downturn in the oil and gas industry. The lack of activity was put to good use with the Sierra Leone Petroleum Directorate and technical partners Getech undertaking collaborative work to integrate the results from the recent drilling campaigns.

The Fourth Licensing Round has been launched against a back-drop of new global investment in deep water; with exploration activity and commercial success in Guyana, Suriname and Senegal providing excellent analogues for future exploration in Sierra Leone and the oblique margin of North West Africa as a whole. In addition, a major reduction in drilling costs from 2014 and a more stable long-run oil price have significantly enhanced the deep-water investment environment.

Most of Sierra Leone is underlain by the Sierra Leone Basin, which is the southernmost of the MSGBC basins. The Monrovia Transform Fault (MTF) divides the broader attenuated crustal zone to the north (Sierra Leone) from the much narrower West Africa transform margin offshore Liberia, showing a rapid transition from continental crust to oceanic crust (Figures 2a and 2b). Our integrated structural analysis (Getech, 2013, 2018) utilises the comprehensive gravity and magnetic data holdings of Getech, together with key seismic and well data from the PDSL.

In our structural assessment we incorporate advanced data processing, integrated modelling, characterisation of crustal architecture, sediment and crustal thickness inversions to form the basis of the integrated structural analysis, which we then use to unravel some of the structural complexities associated with the Sierra Leone continental margin. Our study presents an understanding of the mechanisms involved in the development of play concepts at transform margins and their controlling factors. These ideas can be used predictively to inform exploration evaluations.

One of the key findings is that the offshore Sierra Leone margin to the north of the MTF is influenced by classic extensional tectonics akin to the MSGBC Basin zone (albeit with some transtensional influence), whereas the area to the south of the MFZ is influenced by transform margin tectonics. Furthermore, the undrilled northern Sierra Leone Basin has a similar structural style to the offshore Guinea region therefore giving potential for extensional trapping styles akin to discoveries in these areas.

In Sierra Leone, the presence of kaolinite cementation and quartz overgrowths have in the past been cited as risks to reservoir quality. Getech’s new palaeo drainage analysis and source-to-sink studies challenge this conclusion.

Of the 8 wells drilled in the offshore area, 6 have targeted Upper Cretaceous turbidite systems with varying degrees of success. All six of the recent wells found slope channel and fan sandstones with gross thickness from 10 to 200m and porosities ranging from 5 to 28%. What lithologies the palaeo-drainage systems were eroding will have had a significant effect on the reservoir quality of the shelfal and slope sandstones.

Recent source-to-sink studies by Getech highlight the overall proximal nature of the drilled reservoirs in Sierra Leone and the effect of hinterland geology on reservoir quality; in particular the difference between the Sierra Leonean hinterland and the margin further south (Figure 3). 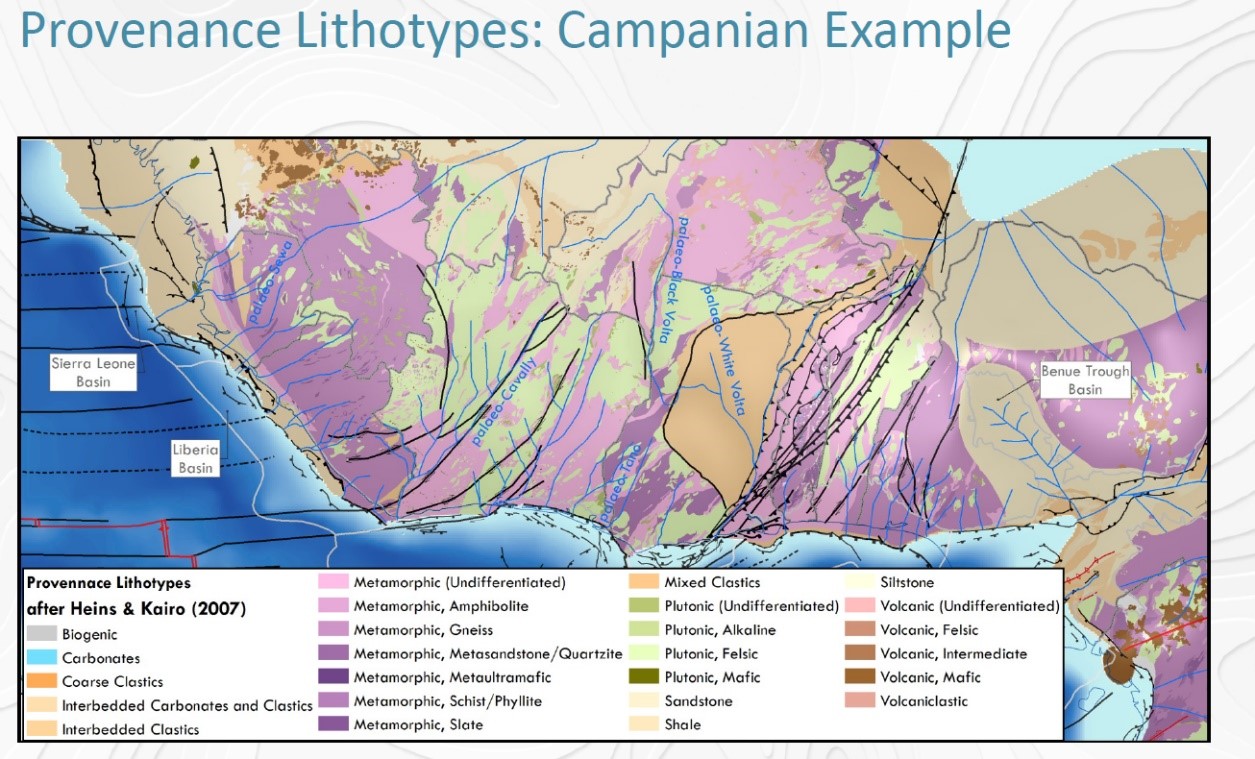 Figure 3: Provenance lithotypes map (above) and charts (below) for Equatorial Africa during the Campanian, highlighting the difference in lithotype between Sierra Leone and Liberia

As for kaolinite, the change in cementation from diagenetic quartz to kaolinite is due to periodic unroofing of the hinterland through time. Kaolinite is derived from K-rich feldspars which decrease in abundance with depth. This therefore results in kaolinite cementation being more prevalent in younger reservoirs (above the K85/88.5 unconformity).

The presence of kaolinite cements, however, do not seem to impact reservoir quality, with kaolinite-rich sands from the Mercury-2 well exhibiting average porosities of 16% and, more importantly, permeabilities over 200mD (Figure 3). In fact, small amounts of pore-lining cements have been shown to enhance reservoir quality by preventing compaction (Nadeau 1998, after Hutcheon 1984 and Ehrenberg 1993).

Furthermore, we can use Sierra Leone’s well control to test these conclusions. Cenomanian–Coniacian sections consist predominantly of fine-grained clastic sediments with sands restricted to the channelised areas. This sequence contains increased amounts of plagioclase deposited by short-headed rivers and derived from metamorphic lithologies in the foothills of the Guinea Highlands. Well sorted sandstone reservoirs are expected in distal locations for the Cenomanian–Coniacian. However, diagenetic quartz-overgrowth cementation at higher temperatures (>120˚C) is common and facilitated by the overall high amount of detrital quartz resulting in reduced poro-perms.

The overlaying Santonian–Maastrichtian sequences display an increase in sand content. The rivers draining into the Sierra Leone depositional basin increased their catchment areas, incising into granitoids and thus increasing K-feldspar abundances in the offshore sediments. Diagenetic quartz overgrowths and kaolinite cement are less pronounced (Figure 4). Kaolinite-rich sands from the Mercury-2 well exhibiting average porosities of 16% and permeabilities over 200 mD. The current understanding is that younger reservoirs (those above the Coniacian-Santonian 85Ma unconformity) have much improved reservoir quality with well-preserved intergranular porosity (Net et al., 2017) making slope fan complexes of that age a potential target for future exploration.

Cuttings and Sidewall core data demonstrate high variability in the grain size, sorting and clay content, resulting from short transport distance and debrite deposition on the slope – these are observed in both sequences.

In the undrilled deep to ultra-deep southern area thick Cenomanian–Turonian shelfal sands intersected up-dip by wells could well be eroded from the shelf and deposited further offshore in channel-fan complexes with potential quality reservoirs. In the unexplored deep to ultra-deep water off the northern and central shelf Cenomanian turbidite, fan and channel sandstone could form potential reservoirs as seen to the north in the Guinea Basin. Sands reaching the slope and basin floor across the wide shelf from questionable feeder rivers remains to be answered by drilling. 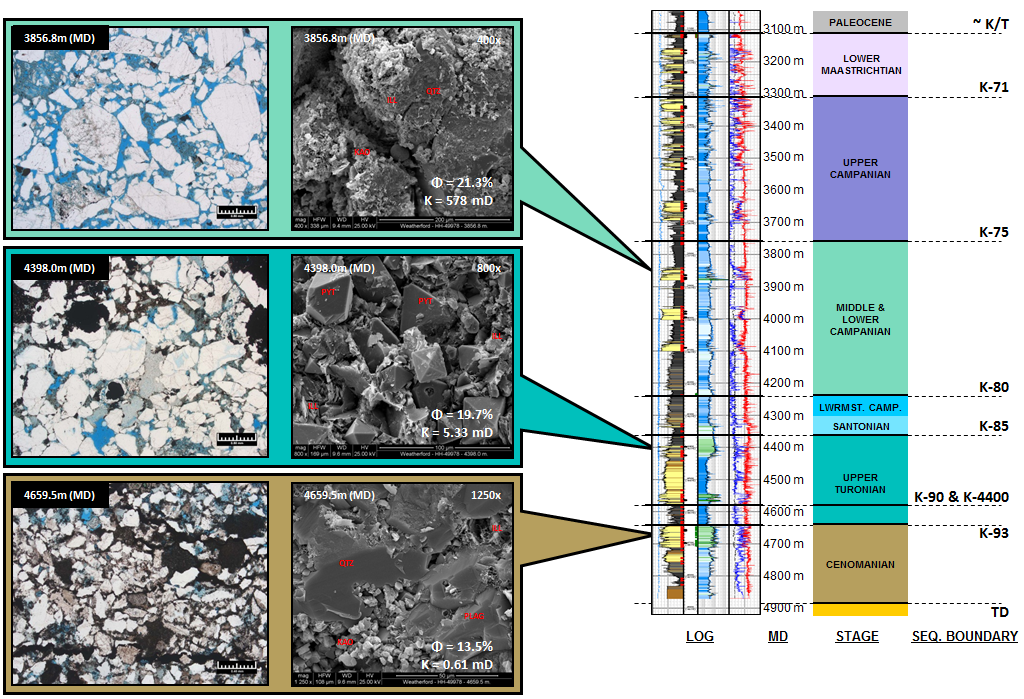 Assessing risk from source to trap

The West African equatorial margin basins are prolific hydrocarbon generators due to the presence of multiple world-class Cretaceous marine and lacustrine source rocks. Sierra Leone is no different, with multiple Lower and Upper Cretaceous source intervals (Table 1) identified in recent drilling campaigns and with favourable timing for hydrocarbon generation.

In the central part of the Sierra Leone Basin the thick Cenomanian–Turonian source rocks extend to the deep water of the margin, and these would have been capable of generating and expelling substantial amounts of hydrocarbons.

Migration would be along trend and up-dip, facilitated by the presence of extensional faults related to the opening of the Atlantic Ocean. The primarily basin-ward Upper Cretaceous deep-marine shales have proven to be an effective seal to turbidite sandstones in the Sierra Leone offshore. The Liberian Basin shales of Cenomanian–Maastrichtian age provide intraformational seals to turbidite reservoirs at the Venus B-1 and Mercury-1 Discoveries (Figure 5).

The northern sector of the Sierra Leone offshore basin forms a highly prospective interplay between the Guinea and Demerara Plateaus and, as such, older source rocks are expected relative to the south of the Sierra Leone margin. Basin modelling suggests pre-rift and syn-rift lacustrine shales are mature at present day, with multiple traps and reservoir sequences identified. 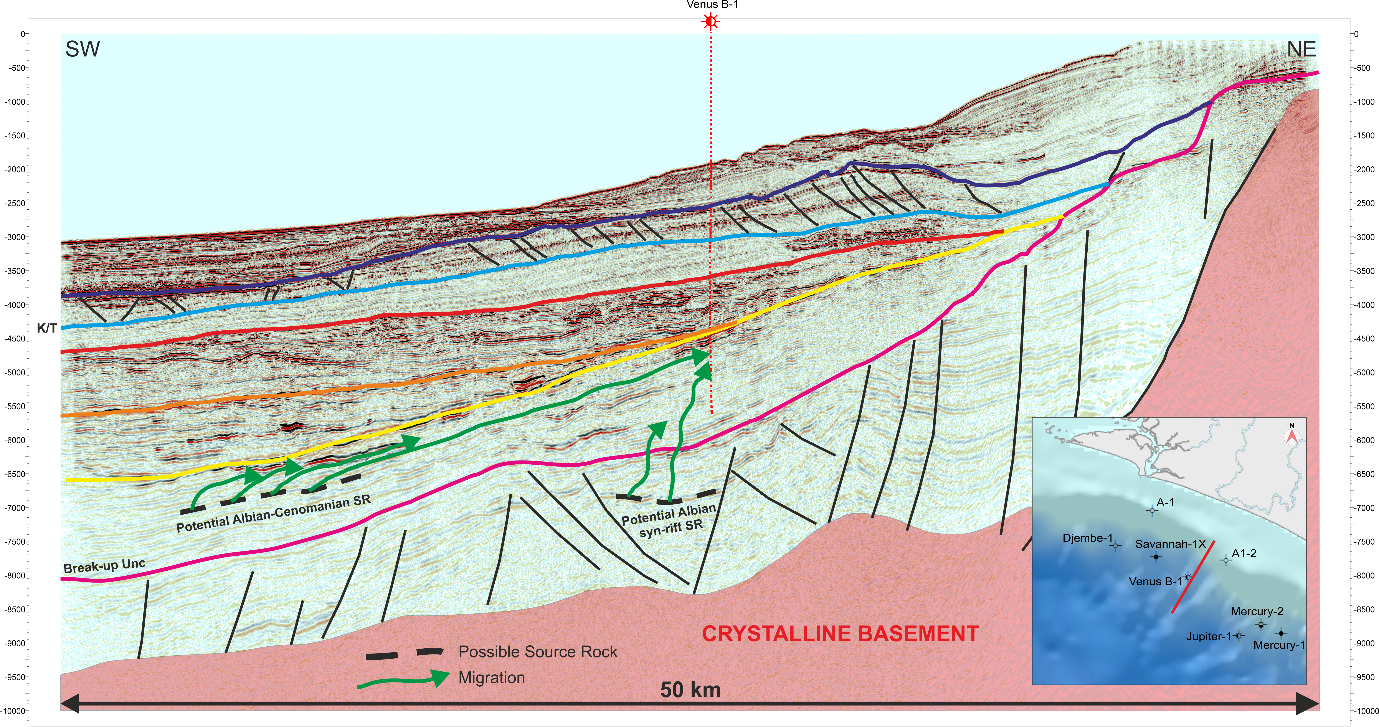 The offshore Sierra Leone acreage remains highly prospective and underexplored, though wells have already encountered light oil and condensate in significant quantities within the basin. There is a proven petroleum system; prospective open acreage with water depths ranging from <100m to >4000m; a stable legal and fiscal regime; a wealth of high-quality well and 2D & 3D seismic data, and four undeveloped discoveries (2009–2013). Whilst the reservoir quality in Sierra Leone is a complex interplay between provenance sedimentology and diagenetic effects, integration of well results with Getech’s source-to-sink studies indicate that good quality reservoir is present in Upper Cretaceous reservoir.

With ongoing successes on the conjugate margins of Senegal and Guyana, Sierra Leone’s Fourth Licensing Round offers an excellent opportunity to enter this exciting area of the Equatorial Atlantic Margin. The deadline for tenders is 28th February 2020. For more information please visit www.pd.gov.sl or www.pd-sl.com.