In this blog we look at ways in which you can assign depth values to geological features and combine the results of your qualitative and quantitative analysis to generate models of the subsurface.

See our previous blog to learn about the importance of understanding the provenance and resolution of your gravity and magnetic data and also how careful processing and generation of key derivatives can help you quickly build a qualitative understanding of the structural framework of any area.

As discussed in Part 1 of the blog series, a key assumption made when analysing magnetic data is that the sedimentary section is non-magnetic and that the observed magnetic response comes from the top or from within crystalline basement. The presence of intra-sedimentary magnetic sources, such as volcanics, can add complexity and uncertainty to our interpretation but the assumption holds for the majority of cases. This means that when we apply quantitative depth analysis to magnetic data we can be reasonably sure of what target we are assigning depths to. Since the observed gravity response is generated from a multitude of discrete density contrasts within the subsurface, depth analysis of the gravity data is prone to error and is harder to interpret. Therefore, it is not typically employed if good quality magnetic data are available.

The maxima in the local wavenumber grid can be identified using the ridge tracking algorithm of Hansen and de Ridder (2006). Depth estimates for each maxima can then be produced based upon an assumed source geometry.

The SPI method tends to produce relatively high-resolution results but can be susceptible to noise in the magnetic grid. 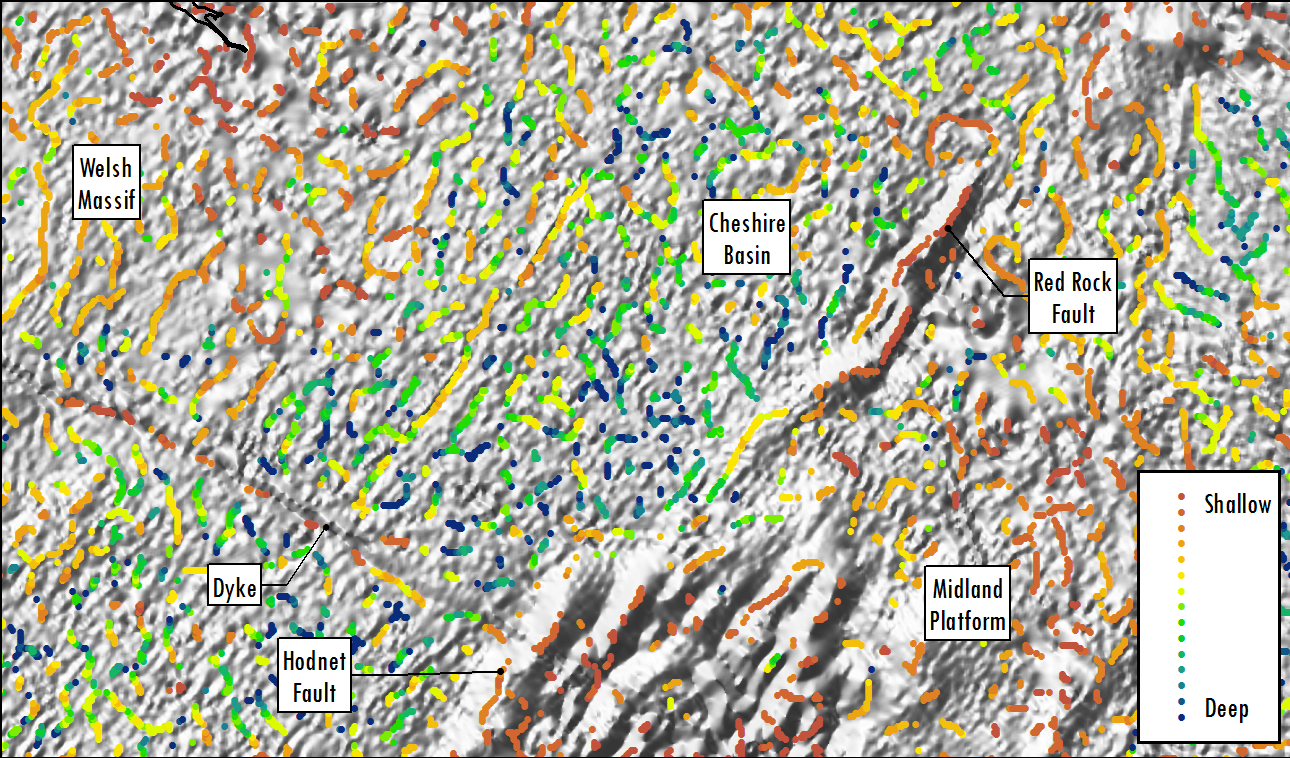 Salem et al. (2008) have shown that the zero contour of the Tilt angle locates the edges of vertical magnetic contacts and that the half-distance between the +/-45 degree contours provides an estimate of source depth.

The Tilt method tends to produce lower resolution results than the SPI method but is less susceptible to noise. As such it is particularly useful at delineating the flanks of basins 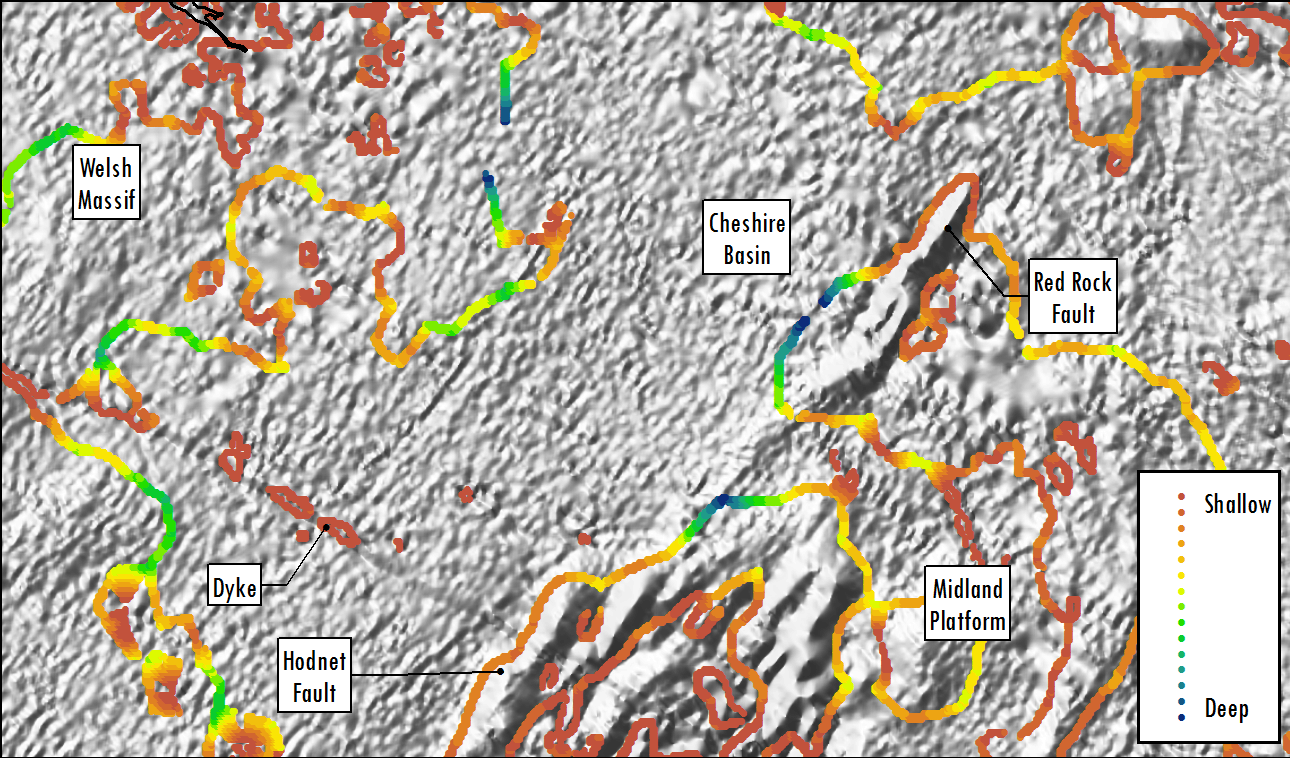 The key to reducing the number of these alternative models is to apply control in the form of seismic interpretation, well tops, density and susceptibility values derived from logging and sampling, outcrop information and magnetic depth estimates.

A good understanding of the regional geology of the study area can also help eliminate unlikely geological interpretations. By going through the 2D modelling process, the interpreter can shed light on unresolved issues such as: 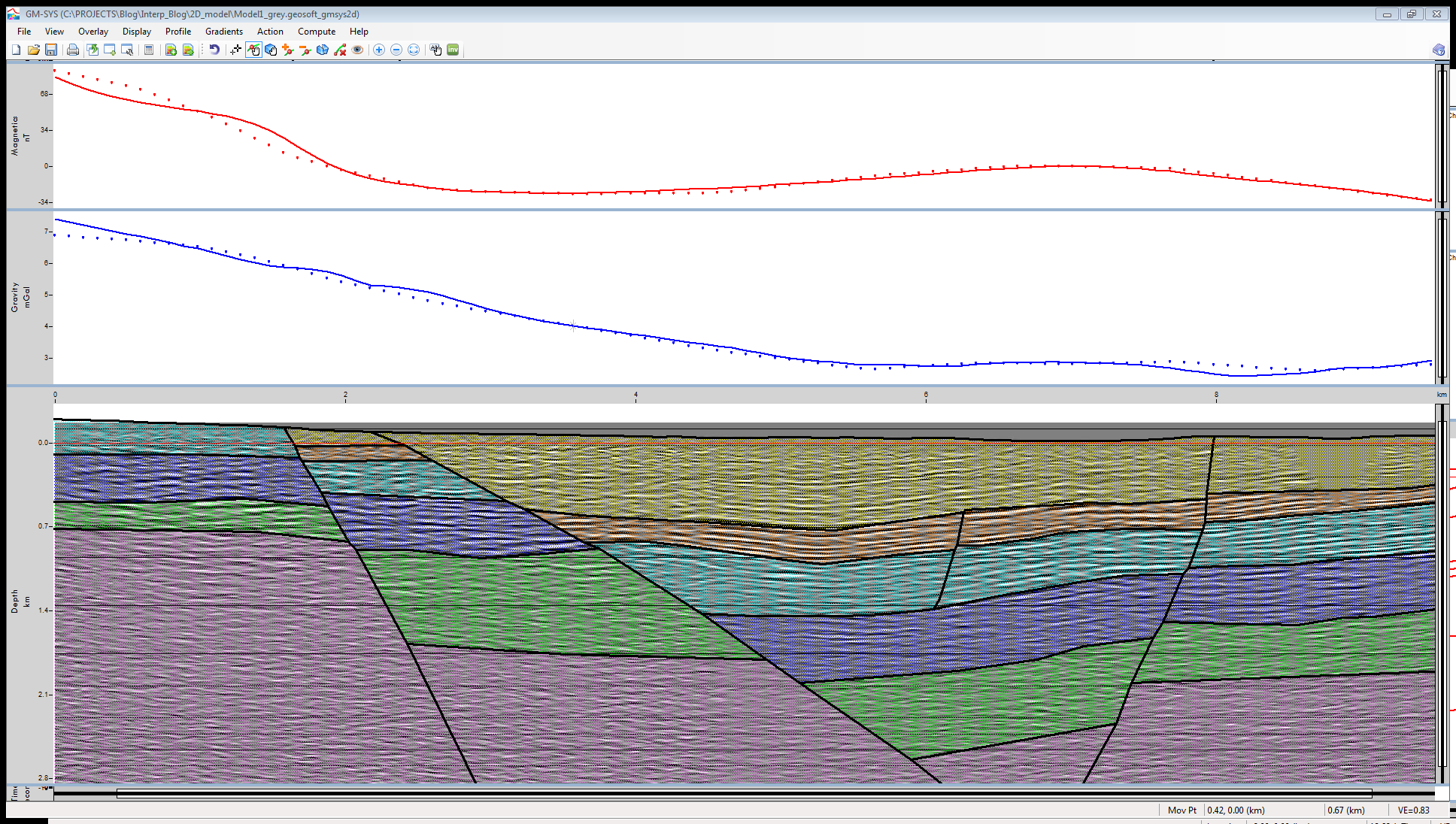 A gravity (or pseudogravity) grid can be inverted to yield a grid of the depth variation of a specific horizon. Commonly, this might be the base of a sedimentary basin, base syn-rift or some other significant horizon that corresponds with a significant density (or pseudodensity) contrast.

Gravity inversions can often be refined by stripping away the gravity effects of known, seismically defined layers so that the residual anomalies can be more reliably related to variations in the target horizon.

The inversion can be constrained by including reliable depth information from seismic, 2D modelling results, well and outcrop datasets for our target horizon. The most common type of inversion uses a grid of gravity but it is also possible to use the same inversion technique for magnetic data as long as the magnetic grid is transformed into a pseudogravity grid.

A pseudogravity grid is a monopolar transformation of an RTP magnetic grid, which is dipolar, thus showing the gravity grid that would be observed if density were proportional to magnetic susceptibility.

The output depth grid from a 3D inversion will be smooth; similar to the input gravity/pseudogravity grid.

As a further step, it is possible to produce a faulted depth grid similar to those produced from a network of seismic lines. However, this involves utilising the qualitative structural interpretation and thus can be susceptible to interpreter bias.

By combining the results of qualitative and quantitative gravity and magnetic data interpretations with supporting geophysical and geological control data (where available) you can generate robust models of the subsurface which can help to reduce exploration uncertainty, provide regional context to prospect-scale exploration and help delineate your targets quickly and at a fraction of the cost of new seismic data acquisition.

Keep an eye out for future Getech blogs and webinars where we will highlight how innovative modelling of potential fields data can improve your understanding of the local thermal regime for maturity modelling and geothermal exploration.